skip to main | skip to sidebar

Some words of advice. Do not drive during any holiday period in Japan!
I keep hearing this advice, but for some reason, I keep ignoring it. So again, with naivety or stupidity, during the Silver Week (an extended holiday period in September), I thought the 47km drive to Nara to visit some famous temples would be easy.
3.5hrs later, the famous temples had half of Japan visiting them. Seems like everyone had the same idea as us. Anyway, the temples are amazing and those people keen on feeding deer will have a ball, as there are hundreds of them to feed.
Anyway, back to the Vespa blog. On the drive back (which only took 1.5hrs), my youngest daughter noticed we were being tailed by a Vespa. So with her best photography, she snapped these "on the go" action shots.

Nara is an amazing place and was the capital of Japan well before Tokyo and Kyoto. More can be found about Nara here: http://en.wikipedia.org/wiki/Nara_Prefecture
Posted by Vespa in Japan at 12:38 AM 5 comments:

It's been a long time since I have spotted a Vespa and had my camera with me. Basically I have seen many but just haven't been prepared.
Well, after attending a colleague's wedding on Kiyamachi Dori recently, I stumbled across the following small frame Vespa. I believe I have seen this one around before but never photographed it. Unfortunately I only had my mobile phone with me so the images are a little poor. 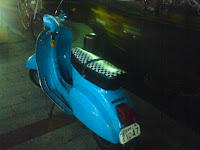 Kiyamachi Dori is one of my favourite streets in Kyoto. In spring, the Cherry Blossoms are spectacular and hang over the Takase River. It is also host to numerous restaurants and bars, and also houses many of Kyoto's more disreputable "entertainment" establishments. 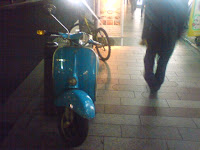 Once again I thought I was off to Shirai Vespa for some more repairs. The reason being, lately the Vespa has been difficult to start, and runs very roughly for the first 10 minutes. After this, its fine but has problems achieving full rev's/speed.
As an example, the Vespa on the open road easily exceeds 80km/h, however, I struggled to even reach 70km/h. 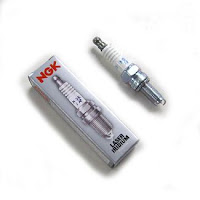 I stopped by Shirai san to advise him it would be coming in for another visit, but as he explained, the Vespa has a 2 stroke engine, and in reality, only the spark plug or carburettor would be at fault. His suggestion was to check the spark plug and if that fails, bring it in.
So with his suggestion in mind, I removed the current spark plug and discovered caked in carbon and oil. A qucik trip to the local Home Centre and JPY240 later, I purchased a new spark plug. Once I had adjusted the gap on the plug, screwed it in tight, a first kick, the Vespa was up and running. The Vespa hadn't felt this good in ages, and all for JPY240!!
Thanks Shirai san.
Posted by Vespa in Japan at 12:17 AM 1 comment:

Well its been a while since I the Vespa has had to go back to Shirai san to have some work done, but for a while now, there has been a disturbing problem.

Quite a while ago, before changing to a new set of tyres, I noticed the right side of the front wheel was rubbing on the forks. Slowly this was eating away the side of the tyre. The risk being of course that the sidewall of the tyre would wear through and eventually cause a puncture. Hopefully not at high speed.

Once I changed the tyres (an earlier blog post), the problem didn't go away and I certainly didn't want to wreck a brand new tyre.

So off again to Shirai san, who initially though the problem was a worn spindle that attaches the

SYDNEY AUSTRALIA
Its raining Vespa's at Sydney Airport!!
Within one minute, in one car park, 4 Vespa's spotted.
Take a close look at the black one. It seems the owner may have dropped it on its side. Maybe going to fast! 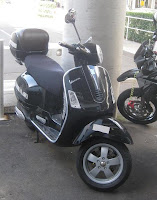 SYDNEY AUSTRALIA
Today was the day it rained Vespa's. I mentioned earlier that Sydney people have been incentivized to buy scooters, but I wasn't prepared for a constant barrage of sightings.
This one is at a major intersection in Sydney, Oxford Street and Park Street. For those of you who know, its the starting area of Sydney's gay Mardi Gras.
Its difficult to see, but directly opposite is a Vespa waiting at the lights and the second shot is of the owner, a girl rising past us. Apologies that the steering wheel of the car is in the way of the second shot. 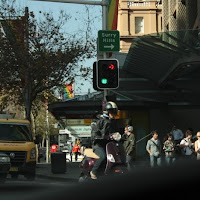 SYDNEY AUSTRALIA
Well I know this blog is about Vespa's in Japan, however as I am in Australia at present, I couldn't help getting a shot of my first Australian spot.

Located in Milsons Point, just above Luna Park and below the Sydney Harbour Bridge, we found this modern version.

Sydney has incentivized the public to buy scooters by offering free parking and other benefits. I have seen a couple of modern Vespa's on the road in the last couple of days, and below you will also see the signage of a Vespa dealer I found.
Posted by Vespa in Japan at 12:13 AM No comments:

Visitors Map - Tell me where you are from?